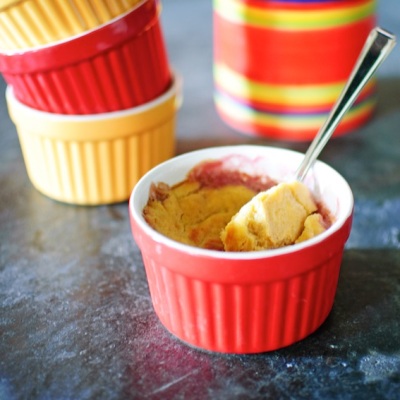 I’ve always had a certain empathy where animals are concerned. I’m sometimes even convinced that I know exactly what they’re thinking, or what they’d be trying to say if they could talk. This past week though I’ve been well and truly had: It turns out that our animals are a bunch of thieving, pathological liars who are on the way to becoming morbidly obese. Be it horses, dogs or hens, they all put on a really dejected, gaunt and hungry look as soon as they catch sight of me. I curse my husband for not having fed them and dispense generous helpings of sympathy and food until I’m satisfied that they’re not going to fade away from neglect. This means that instead of being fed twice a day, they end up being fed four times (at least!). And all because I fancy myself as some kind of present day Dr Dolittle.

I had to concoct a recipe that didn’t call for too many eggs as Java (our ten-month-old English Setter puppy) has taken to pinching them the minute they’re laid. I managed to retrieve a stray yolk for this recipe and was very pleased with the result…

30g rye flour (you can use plain flour)

Preheat the oven to 180°C. Prepare the ramekins by lining the bottom with six or seven frozen raspberries or a tablespoon of raspberry jam. Put the flour, dessicated coconut, coconut milk, vanilla essence and nutmeg into a heavy-bottomed medium-sized saucepan and heat gently, whisking continuously until the mixture thickens. Add the egg yolk, mashed banana, sugar and raisins and return to the heat, again whisking well, for a few minutes. Pour the mixture into the ramekins, filling to about 1cm from the top. Bake for 20 minutes and then chill for a couple of hours before eating.