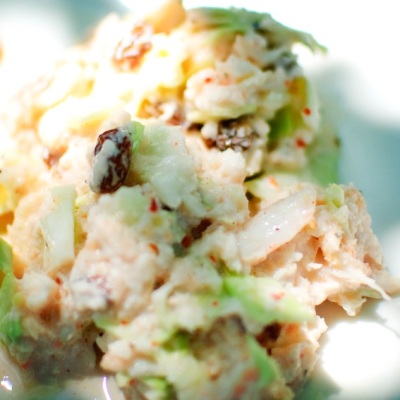 This is a translation of a ‘phone conversation between my nine-year-old son and his friend :

Son : ‘Hi ‘Friend’, would you like to play tennis this morning?’

Friend: ‘Er, OK, but could we make it this afternoon?’

Son: ‘But it’s going to be too hot this afternoon – why can’t you make it this morning?’

My son applied his steadfast and infallible logic, advised his friend to dig out a sweater and off they went.  Imagine though, the possibilites of this kind of rationale. ‘Inappropriate attire’ could become a valid excuse for getting out of just about everything – school, work, boring cocktail parties, cooking lunch, the possibilities are endless…

Unfortunately for me, I was dressed appropriately enough to make lunch and I produced this crab salad. To be consumed on a terrace in light attire:

A thumb of freshly grated ginger

seasalt and pepper to taste

Combine the onions, garlic, cucumber, raisins and ginger in a small mixing bowl. Add the drained crab and the sweet and sour sauce, mixing well. Add the Greek yoghurt and spices and mix with a spoon until the crab is entirely covered in the yoghurt mixture. Serve chilled.