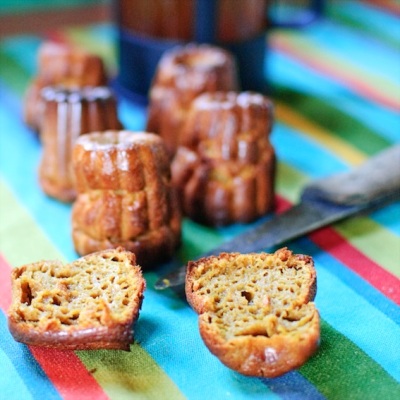 There is an exquisite patisserie called Pariès in Bayonne, which is the capital of the Basque country in south-western France. They recently produced a  book of their recipes, which I discovered the other day. Bayonne is famous for its chocolate, amongst other things, and was one of the first places in Europe to produce chocolate in the early 17th century. There is always a deliciously rich, chocolate-laden aroma in the streets of the city centre. It’s sometimes worth just strolling around there to get a fix!

I will be sharing some of the chocolate recipes from this absolute gem of a book, but today I made another regional speciality: canelé [kan-ul-ay]. A canelé (or cannelé) is a small French pastry with a moist custard-like centre and a dark, thick caramelized crust. It is the shape of a striated cylinder approximately 5 cms in height and is a specialty of Bordeaux.

These contain too much sugar for me to claim that they’re positively good for you. Having said that, I made them with cane sugar and spelt flour (of course!) and as they contain rich, ‘real’ ingredients they are most definitely a healthier choice as a treat than anything in packaging! I had to make a second batch to photograph because the first batch disappeared far too quickly; They’re that moreish!

You will need a special canelé mould to make these. The best are made from copper, although I used silicon.

A little extra butter for greasing the moulds

Beat the egg yolks, egg and sugar in a mixing bowl. Add the flour and vanilla and continue to mix gently. Bring the milk to the boil in a saucepan, remove from the heat and immediately add the butter. When the milk has cooled to lukewarm, add to the other ingredients in the mixing bowl.  Mix well. Leave the mixture to rest in the fridge for at least 24 hours, 48 hours if possible. This is important as the mixture must be as ‘airless’ as possible or it will rise during cooking. Also for this reason, it must always be mixed gently, taking care not to add too much air.

To cook the canelés, preheat the oven to 220°C. Remove the mixture from the fridge and very gently stir the (what will now be separated) batter until homogenous. Add the rum at this stage too. Fill the buttered moulds about 7/8 full. Cook for 10 minutes at 220°C and then turn the oven down to 190°C. Cook for a further 40 minutes. Leave to cool before eating.