Scooting through the Baltic

Leaving Luc to look after the animals, Léo and I travelled to London at the beginning of August, where I was able to shoot a confused pigeon and shop for everything I’d forgotten to pack. We then set off with my mother on a cruise around the Baltic. I will try to be brief! 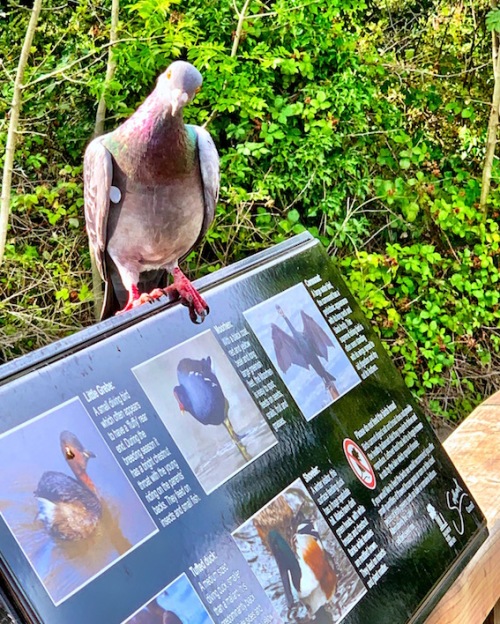 We arrived in Copenhagen with a few hours to visit, so hired scooters which we proceeded to use as lethal weapons. I quickly became fluent enough in Danish to say: ‘I’m so sorry, I’m totally out of control — I really didn’t mean to knock you over’.

We caught a glimpse of the famous Little Mermaid statue and also saw her Genetically Modified Little Mermaid sister, which belongs to a group of sculptures called The Genetically Modified Paradise by Bjorn Nørgaard, situated in the harbour area. Copenhagen sighed a collective sigh of relief when we arrived at the ship with five minutes to spare, dripping with sweat and with no idea of our cabin number or the whereabouts of our baggage. Our reputation was forged from the get-go.

Tallinn’s old town was sporting a rainbow when we docked. Downtown Tallinn was like Oxford Street on the first day of the sales, so Léo and I hotfooted it out to the countryside to go seal spotting on a small speedboat. A combination of the impact of large waves and the flexibility of the seats meant that my waterproof coat got sucked up and entrenched between the seat and the shell of the boat (you had to be there). The seals were so close that I would have been able to take some superb photos if I hadn’t been concentrating on trying to free myself before hypoxia set in. Léo kindly let me use one of his photos. Liberated and back on dry land, we had just enough time to track down and hire one electric scooter, which we both boarded for a lightning visit of the old town. I’ll leave to your imagination the consequences of a jam-packed old town and two maniacs on a one-person scooter. Let me just say kudos to the lovely Estonian taxi driver who eventually saw the funny side and won’t be pressing charges. 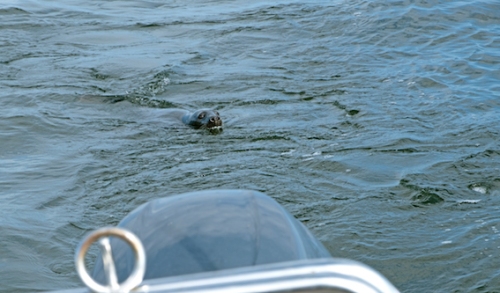 We arrived in St Petersburg in the early morning and parked next to a military submarine, as you do. We were on the ship’s group visa, which meant that we weren’t able to go out unaccompanied. At the time I was frustrated by this and thought I had made a mistake, but typing the words ‘unaccompanied’, I realise that my disorganised ineptitude was probably a blessing in disguise; the Russians in the street are warm and charming with a wonderfully dry and engaging sense of humour. The customs officials, not so much, and it was probably best we didn’t have direct dealings. As Léo put it: ‘you get the feeling that if you were to do something stupid, it wouldn’t go down as well as it does in France’. Peter the Great created this charming, atmospheric city in the early 18th Century, having been inspired by London, Paris and Vienna. Its canals and waterways are reminiscent of Venice.

The highlight of the trip for me was a private concert in the Italian room at The Hermitage Museum performed by the St Petersburg Festival Orchestra. Their knack for seamlessly combining extreme melancholy, slight irreverence and dramatic theatricals was breath-taking. 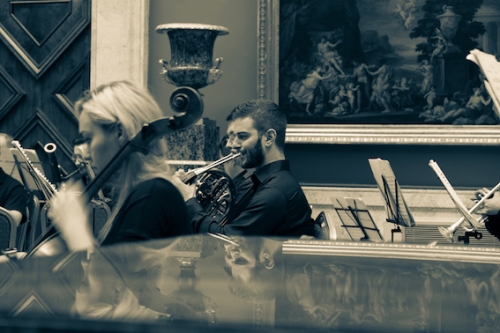 We cut our visit to Catherine Palace short when I realised that a trip to Emergency might mean I miss the boat.  I savoured the over-the-top opulence from a state of semi-consciousness, somewhere between full-blown panic attack and fainting fit. The crowds were so dense and the palace so airless (they have to keep all the gold leaf at a constant temperature and not one of the museums is air-conditioned), that I had instructed poor Léo to keep me vertical if I fainted because I didn’t want to be hauled off by my feet by one of the scary-looking lady officials. Needless to say, I’m over gold leaf. The gardens were wonderful though and I think I especially appreciated them as I was so happy to be outside again. 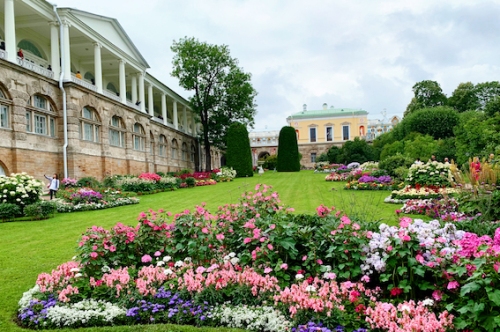 There are almost 350 bridges in St Petersburg and this is the newest one over the Neven River: the Bolshoy Obukhovsk Bridge, which we saw on our departure back out into the Gulf of Finland. 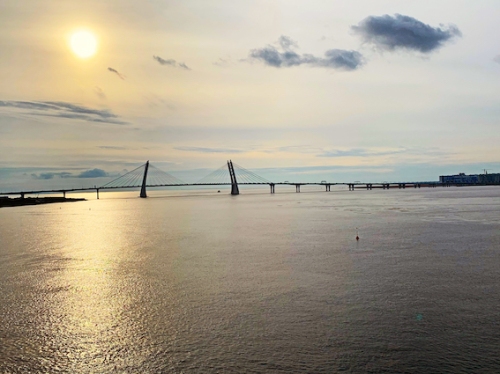 Helsinki was possibly the greatest surprise of the trip. I hadn’t really thought at any point ‘God, I’m just dying to visit Helsinki’, but it proved to be captivating. There are subtle reminders of past Russian influence, but without the gold leaf opulence tsunami which is omnipresent in St Petersburg. We hired bikes, mainly because our scooting legs were knackered and there was a lot of city to cover in a limited time. Also, I think that, on the whole, the Baltic countries had been sufficiently charmed by our scooter antics. 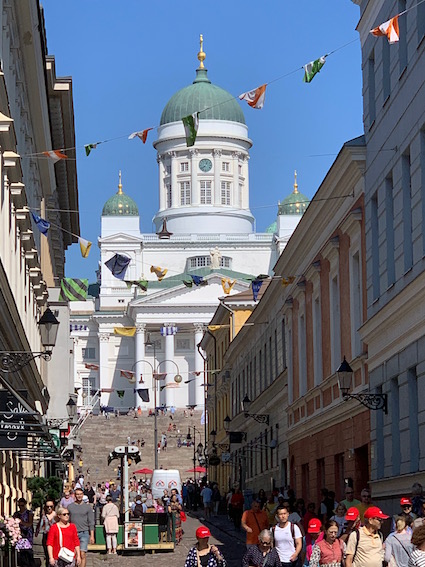 Léo disowned me at The Sibelius monument when I lectured a tourist who had draped herself and her Louis Vuiton raincoat ensemble provocatively over the monument that I was trying to photograph. I think she thought gaudy beige tartan would enhance it. My ill-tempered rant was greeted by noisy applause from a Spanish group who had been having less luck conveying their frustration. Conveying frustration is never something I have problems with. My mother told us, in not inconsiderable detail, about how Sibelius had been ‘more than a bit of a bastard to his family’, which was another slight dampener. The memorial was stunning nonetheless.

I love contrasts and particularly appreciated the juxtaposition of this beautiful orthodox church and the big wheel. The Uspenski Cathedral is the largest orthodox church in Western Europe.

The sea was only really rough once, on our last evening. I fell over a table and had an intimate encounter with the banisters of the central spiral staircase, resulting in multiple souvenir bruises. Stockholm was our last port of call, but unfortunately all we really saw, other than this view from the ship and the archipelagos, was the airport.