I needed a delicious dessert to make for a lunch party today and, as our kitchen has apparently recently been transformed from family kitchen to medium-scale fig jam processing plant (see previous post!), it had to be something quick and easy. My husband and I married for better or for worse, but absolutely NOT to be cooking in the kitchen at the same time.

This mousse is really divine. It’s rich but simple and not too sweet. The recipe is a slightly adapted (I’m incapable of leaving a recipe intact) Montignac recipe, so its GI rating is good (ie low!) because it contains absolutely no added sugar. The rum I used is very luxurious and deliciously fragrant but I’m sure any rum will do.

Dark chocolate is full of antioxidants. Cocoa is a good source of vitamins and minerals including magnesium, calcium, iron, sulphur and manganese. It also contains B vitamins. Cocoa nibs have all the same benefits as chocolate in a purer, more powerful form.

Break the chocolate into pieces and melt in a casserole with the rum. Separate the eggs and beat the whites with a pinch of salt until stiff. Once the chocolate has melted, add the beaten egg yolks to the mixture and stir rapidly for about a minute. Stir in the cocoa nibs and then delicately add the mixture to the egg whites, stiring well to obtain a smooth, homogenous texture. Transfer into four ramekins or glasses. Chill for at least five hours before serving.

There seem to be an awful lot of irresponsible parents around here. They have countless offspring and then leave them to fend for themselves while they go off galavanting, without even taking the time to check that their babies can … Continue reading → 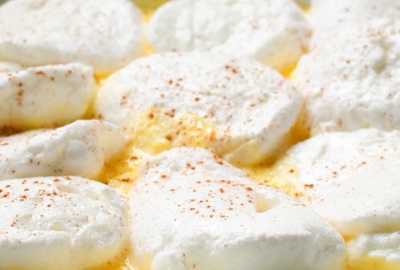 After three years’ pretending that he’s So Not Bothered by storms, our neurotic labrador has suddenly decided that they absolutely terrify him. He’s gone from superior nonchalence to quivering wreck in one furl swoop; no half-measures with Hugo. Which means that when it’s stormy (which is quite often here in the Spring), I gain an appendage of 30 kilos of black fur, which is a bit of a hindrance for moving around the kitchen (and certainly not a good look).

In spite of my appendage (or perhaps thanks to), I somehow managed to make this which is really delicious. The recipe came from my late mother-in-law.

Ingredients (serves about 6, depending on greed)

Beat the egg whites (adding a pinch of salt) until firm, then separate with a serving spoon and cook in the remaining milk which should be simmering (this should take about two minutes; one minute on each side). Sieve once cooked.

Add the cooking milk to the milk/cornflour/egg mixture with a whisk and bring to the boil until the mixture thickens (a couple of minutes). Add the rum and pour into a bowl and place the cooked egg whites on top. Refrigerate and serve chilled.