Leek and potato soup with mushrooms and repeat offenders 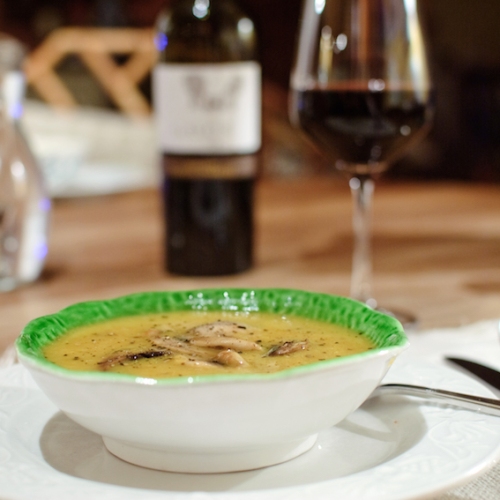 After a busy week for tumbles — my husband fell backwards off his horse and frontwards off his bike — we had planned to go the beach for lunch on Sunday. Léo however had other plans; he performed a forward somersault off his bike and landed on his already twice-fractured arm.

Emergency departments are never a pretty sight, but even less so on Sunday mornings when they’re full of bloody rugby players (I don’t have anything against rugby players, but they always seem to have blood spouting from somewhere), and the dregs of Saturday night. As they fast track young children, I told Léo to make himself look little, which, as he’s over 6ft now, made me sound a bit insane.

The receptionist greeted us like old friends and commented more than once on the fact that our family’s records took up a substantial amount of room on her database. As this was potentially his fourth broken arm (he once very efficiently broke them both at the same time), she wondered if he might have any deficiencies. I said that yes, I was convinced he had a number of deficiencies: fear and common sense to name but two. She looked at me strangely and said that she had be thinking more along the lines of calcium or vitamin D. In the end, it turned out that his arm wasn’t broken, just badly dented, which didn’t really sound much better to me, but I suppose it made for a change. For some reason, on our way out I felt compelled to shout over to the receptionist like a madwoman that his arm wasn’t properly broken this time. I felt the need to justify as she’d made me feel like a repeat offender. I suppose she might have a point…

Leeks are an extremely rich source of  vitamin K which is surprisingly important for bone health. Mind you, so is avoiding falling off your horse or bike. Vitamin K has repeatedly been shown to help avoid bone fractures. Leeks also contain substantial quantities of vitamins A and C, calcium, magnesium and phosphorus and are a rich source of allicin, a sulphur-containing compound with anti-bacterial, anti-viral and anti-fungal properties.

500ml chicken stock  (or vegetable if you prefer)

Melt the butter in a large saucepan over a medium heat. Add the leeks, potatoes, garlic, shallots and thyme and cook for about five minutes, stirring occasionally to prevent sticking. Add the stock and simmer for about 20 minutes, or until the potatoes are soft. Remove the thyme and bay leaves. Blend the soup until smooth and add the crème fraîche. Fry the mushroom in a little butter until golden brown, seasoning with salt and pepper. Add a spoonful of mushrooms to each bowl of soup and serve.