I have a food fight-related injury: Last night I sat reading next to Java’s food bowl, which was obviously a bad idea. Hugo appeared and, presumably deciding that her bowl looked more enticing than his, tucked in. Fourteen kilo Java immediately launched herself at 35 kilo Hugo, the force of which catapulted me out of the chair, and headfirst into a fairly substantial cactus plant. They both escaped intact — although I suspect Hugo’s pride took a kicking — and I ended up with blood coursing down my forehead.

On the subject of thorny shrubs, I planted a beautiful rosebush about a month ago. Its growth has been inversely proportional to the amount of time it has been in the ground. The reason for this was spotted last week: A baby deer breakfasts on the flowers every morning. It gives me such pleasure to see the fawn, that I’ve been Googling ‘snacks for baby deer’ for when the flowers run out!

Ginger is sometimes described as the ‘king of anti inflammatory foods’. It has been used in virtually every traditional healing system in the world for thousands of years.

The powerful essential oils that give ginger its spicy taste and aroma, zingerone and shogaol, are both powerful anti inflammatory agents, working in a similar way to COX-2 inhibitors in that they inhibit an enzyme called cyclo-oxygenase, the enzyme responsible for inflammation and pain. Gingerols are also potent antioxidants, which increase its anti inflammatory action. This explains why, in recent years, ginger has emerged as a beneficial treatment for people suffering from arthritis.

Ginger is a very powerful circulatory stimulant. It acts by relaxing and widening the blood vessel walls, so it is also very effective for lowering blood pressure. It is also often used as a remedy for nausea. Ginger is also a powerful immune moderator; the gingerols interfere with the production of cytokines, helping to deactivate them.

Grease and prepare a loaf tin. Preheat the oven to 170°C. Place the molasses, agave syrup and coconut oil in a saucepan and heat gently until the coconut oil has melted. Beat the egg and the yoghurt together. Sift the flour, salt and bicarbonate of soda into a bowl. Combine all of the ingredients, including the pears and ginger, mixing well. Transfer the mixture to the prepared loaf tin and bake for about 50 minutes, or until risen and firm to the touch.

Two of our horses went for a sleepover last night. Castaño, our youngest horse, goes for private tuition every Monday at a nearby School for Extraordinarily Naughty Horses. The school is very recent; I’m convinced its creation was motivated by the mass of potential clients amongst our wayward equines. We received a phone call from Castaño’s teacher at 11pm, asking whether we had lost anything. After establishing that, unfortunately for me, she hadn’t found my sunglasses, she said that she did have our two bay horses. It was decided they stay overnight, which thankfully avoided us a precarious and muddy moonlit traipse. When I went to fetch them this morning, it occurred to me that maybe Castaño had been trying to win brownie points by turning up early for his weekly lesson and had taken Texas, the wise 30-year-old, to show him the place where he was learning to become A Better Horse. I think we can safely say this particular project is still very much ‘work in progress’… 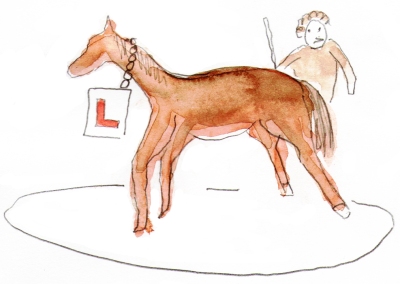 These muffins are a really rich double chocolate treat. Just in case you’re looking for an excuse to make them, both cardamon and dark chocolate increase serotonin levels in the brain. Amongst other things, serotonin helps ward off depression. And who doesn’t need a serotonin boost towards the end of the winter?

Preheat the oven to 180°C. Prepare and grease two muffin tins with butter or coconut oil. Sift the flour, cocoa powder, baking powder, bicarbonate of soda, cardamon and ginger into a large mixing bowl and set aside. In a separate bowl, beat the eggs and then add the coconut milk, honey, pear, melted coconut oil and chocolate, stirring constantly. Combine the two mixtures well. Fill the muffin tins and bake for about 18 minutes.

There are times when only cheesecake will do and yesterday was one of those times 🙂  As the only ingredients I had to hand were mascarpone, lemons and ginger (four hens and not an egg in sight, but don’t let’s go there), I created these tartlets. I have to say, they were divine and my cheesecake yearning was well and truly satisfied.

These tarts are gluten free and have a low glycemic index (neither buckwheat nor coconut flours contain gluten and they both have a low GI, as do all dairy products).

Juice of one lemon

To make the pastry, begin by cutting the butter and coconut oil into small cubes. Add to the flours and a pinch of salt in a mixing bowl. Blend by hand until the mixture becomes crumbly. Add the cold water, mixing rapidly with a spoon. Remove the mixture from the bowl onto a lightly floured surface. Knead until you obtain a ball of pastry (if the mixture isn’t ‘sticky’ enough to form a ball, you may need a drop more water). Wrap in a clean cotton tea towel or some cling film and leave to ‘rest’ in the fridge for about two hours. This relaxes the dough and makes it easier to use.

Preheat the oven to 180°C. Roll out the pastry on a clean, lightly floured surface and fill the tart tins. Bear in mind that buckwheat and coconut flour pastry is extremely crumbly as it contains no gluten to ‘stick’ it together. You’ll probably need to patch and press the pastry into the tins as opposed to just cutting and placing it in as you would with normal pastry. Cook the pastry for 15 minutes.

Blend all of the ‘cheesecake’ ingredients together well, fill the precooked tart cases and garnish with candied ginger and mint. Chill for at least an hour before serving.

We’re savouring the last of our figs in this delicate, fragrant mousse.  My husband decided that 346 pots of jam was probably jam enough to last until next year ;-). Not a moment too soon if you ask me – I’ve been able to reclaim my kitchen.

Combine the yoghurt, figs, lemon zest, ginger, honey and rum and leave to chill.
Whip cream to until stiff and gently fold in with the chilled fig mixture.
Serve immediately for mousse OR spoon into a mold and freeze for frozen mousse. 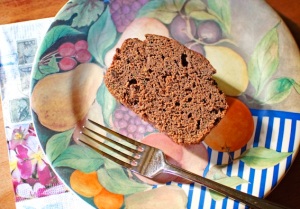 With the hunting season in full-swing,  I’m having to deal with a labrador hovering on the brink of nervous breakdown; he doesn’t like the sound of guns (despite the fact that, technically at least, he’s a ‘gun dog’). It’s a touch and go situation and I’m still sticking to my vegetarian resolution in solidarity, so this cake contains no meat whatsoever 😉 Just a word of warning: it does contain grated courgettes so if, like me, you live with men and children with entrenched prejudices about how and when vegetables should – or, more to the point, should not  – be consumed, my advice is to keep the recipe under wraps. It’s delicious and that’s all they need to know. As cakes go, this one is also exceptionally healthy: buckwheat flour is gluten-free and full of fibre, amino acids, vitamins and minerals, courgettes speak for themselves and organic cocoa powder is rich in iron.

1 pinch of bicarbonate of soda

Preheat the oven to 160°C. Combine the dry ingredients (flour, cocoa powder, sugar, cocoa nibs, salt , bicarbonate of soda and baking powder) in a bowl and mix well. In another bowl, combine the ‘wet’ ingredients (eggs, milk, grated courgettes, ginger and melted coconut oil) and mix well. Combine both sets of ingredients, folding the mixture to obtain a smooth batter. Pour the batter into a loaf tin (preferably pyrex) roughly 25cm long by 6cm deep. Cook for about 40 minutes, or until a fork comes out clean.

My passion for figs is similar to my passion for tomatoes; it starts out all guns blazing, only to die a sudden death after the second consecutive week of thrice-daily consumption. Figs are pure nectar, either eaten straight from the … Continue reading →

Spicy lentil soup might seem a rather unexpected choice for the South of France in the middle of July, but I’m indulging the locals who, poor things, are at the end of their weather-tethers. It is unseasonably cool this Summer with many days not getting above the low 20s. Anything under 40°C  in July and August in this region is unacceptable and strictly for namby-pambies (Parisians). It gives carte blanche for unrestricted and expansive whingeing, as well as countless visits to the doctor for weather-related complaints such as ‘chills’ and acute depression.

Puy lentils have a delicious earthy flavour and are packed full of goodness – protein in the form of amino acids and fibre. They are also an excellent source of iron and B vitamins. What better for a cold Summer day 😉

Put the lentils, diced tomatoes, onion, carrots and seasoning into a large saucepan containing 2.5 litres of boiling water. Bring the water back to the boil and then simmer uncovered for about 45 minutes.

Five minutes before the soup is ready, heat the oils in a frying pan and gently fry the garlic and ginger until golden brown. Add to the soup, mix well and simmer for a few more minutes. Serve with chickpea pancakes which will be the subject of my next post…

Fish curry (and absolutely not a hen in sight!)

To follow on from my previous post, my husband decided that the softly softly ‘I’m listening’ approach was not going to be the way forward with our moody, hormonal hen. Anyone who has met my husband will appreciate that this … Continue reading →

This was topical a week ago, but I’ve been rather over-stretched. Amongst other things, the horses flooded their barn (our mare enjoys turning on taps with her nose), and one of the hens is in the midst of a phanton pregnancy. Actually our mare’s passion for taps might be a blessing in disguise.  The flooding reached the hens’ nest which meant that the phantom nester had to abandon ship (not without much cussing) and go back to being a hen that struts around (with wet feet!), as opposed to a hen that skulks in bed, hissing at anyone that approaches and only getting up once a day for food. This, I assume is the hen equivalent of a ‘fags and booze run’. Thinking about it, maybe she’s just hit adolescence and it’s not a phantom pregnancy at all…

This coronation chicken is made with Greek yoghurt as opposed to mayonaise, which makes it a healthier option, without sacrificing any of the creamy taste or texture.

half a cup of sultanas

half a cup of chopped almonds

Poach the chicken breasts in the wine, a little water and melted butter (there should be enough liquid to just cover them), seasoning and bay leaves. Strain and put aside to cool.

My plan had been to cook these pork chops on the open fire, but since I had let the fire go out (there are limits to my multi-tasking talents) and it’s hard to justify rekindling a fire when it’s over 20°C outside, I decided to cut the meat into strips and cook them on the hob.

Chop the shallots, garlic, mushrooms and apples and fry until golden brown in olive oil.  Add the stips of pork and then the grated ginger, cinnamon stick and cashew nuts. Season to taste (I tend to like things hot and spicy). Keep frying until the pork is cooked (roughly five minutes) and then add the calvados and cream. Cook for a further two or three minutes until the cream is bubbling and slightly thickened.

Serve with rice or shredded cabbage.