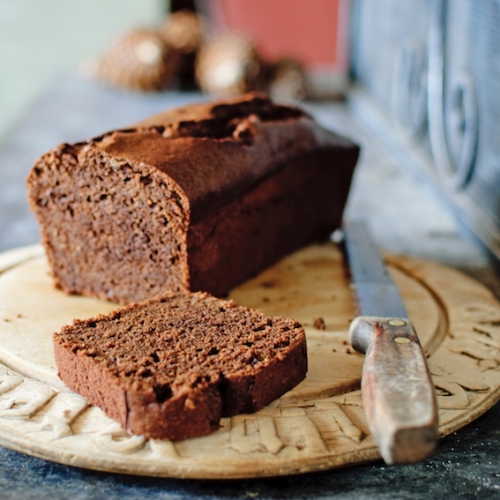 My latest goal in life is to photograph Hugo and Java together, at the same time, in the same place and, if at all possible, sitting still. Never let it be said that I lack ambition. I recently told Hugo — well asked really; Hugo isn’t the sort of dog you order about — to sit while I took a photo of him. Since then, the moment he catches a glimpse of a camera lens he sits and tilts his head just enough to do his profile justice. I think he may be the reincarnation of one of Pavlov’s dogs. Java, on the other hand, not so much. Once she’s outside, under no circumstances does she ‘do’ sitting. Or even standing still. So I have one unnaturally static dog pouting into the camera and flaunting his best side like a runway model who’s just tossed her cookies, and the other who is nothing but a distant white blur. I have a feeling that I set the bar pretty high for myself, because so far all I’ve managed are these: The Pout and The Blur.

This cake, on the other hand, was a great success. Inspired from a David Lobowitz recipe, it really is one of the lightest, most delicious chocolate cakes ever…

Preheat the oven to 180ºC and prepare a medium-sized loaf tin. Melt the chocolate and coconut oil until smooth and add the vanilla extract and rum. Whisk the egg yolks, sugar and yogurt until light and smooth and then combine with the melted chocolate/coconut oil. Mix the ground almonds, buckwheat flour, salt and bicarbonate of soda together and then combine well with the egg yolk and chocolate mixture. Whisk the egg whites until they form soft peaks and gently but thoroughly fold into the chocolate mixture. Pour the mixture into the loaf tin and bake for 30 minutes. Remove from the tin and leave to cool. Delicious served alone or with Greek yoghurt or ice cream.

Chocolate pound cake and an imminent trip to China

Customer service in mobile phone shops in France has done a 180: The motto, ‘the customer is always wrong’ used to be de rigueur, and the only way to get what you wanted was either to flirt outrageously or scream like a harridan (I had both techniques down pat). Now it seems all of a sudden that ‘the customer is always right’, which is oddly disconcerting.

Yesterday I visited not one, but two mobile phone suppliers. Before anyone thinks I’ve totally lost it, let me quickly point out that this was out of absolute necessity and not choice. One of the horses had tested the sturdiness of my phone’s glass screen with its hoof (hoof: one, phone: nil) and as a mobile phone is essential given my inclination to fall into deep ditches in the middle of nowhere, replacing it was a matter of urgency.

The first boutique was unable to help me because, despite having the phone I had painstakingly tracked down, ordered and already paid for online in their possession, they claimed that ‘my order had failed’. They unequivocally agreed that it was outrageous/unbelievable/infuriating/beyond obtuse and criminally time-wasting, which completely took the wind out of my sails. Unfortunately there was nothing they could do because their ‘management are scumbags’.

After a 45 minute wait surrounded by people with banana-shaped upper bodies, it was much the same story in the second shop. It would appear that from a telecom point of view, I have ‘special needs’ far too complex to fulfil, especially in view of the fact that everyone’s bosses are unprincipled reprobates. I’m still not sure how I feel about having my phone requirements sentenced to the ‘special needs’ category.

Despite returning home 20 years older and still phoneless, I was able to muster just enough courage to once again locate what I wanted online. It was delivered the next day and I was so anxious to get it up and running that I inadvertently set the language to Chinese.  It was a long and arduous task – 長和艱鉅任務 – coaxing it back to French, but I definitely felt it was a sign; in future I’m off to Beijing to buy my phones –  it’ll be far less hassle and I’m keen to test my new-found language skills.

This recipe uses raw cocoa powder which means that the cocoa beans have been processed without using the high temperatures detrimental to its nutritional content. Raw cocoa powder contains natural mood stimulants as well as arginine, an essential amino acid that helps to reduce blood pressure. It is also a very rich source of antioxidants and vitamins and minerals, including high levels of magnesium to aid heart health, build strong bones and relax the muscles and the mind.

Sift the flours, cocoa powder, baking powder and bicarbonate of soda together and set aside. Cut the butter and coconut oil into cubes and leave to soften at room temperature for a few minutes. Beat with an electric mixer for about ten minutes until fluffy and then gradually add the sugar, continuing to beat. Add the eggs one at a time and whisk for another few minutes. Lastly, add the rum and almond essence and gently fold in the flour. Transfer the mixture to a buttered loaf tin and cook in a non-preheated oven at 160°C for about an hour, or until a skewer comes out clean. Leave to cool in the tin.

Based on my current posts, anyone would think that we currently existed solely on a diet of chocolate cake. Last week I scored a significant hit of carrots and beets from our neighbour, Yvette. Unfortunately the carrots disappeared within the hour; our asset management leaves a lot to be desired at the moment. Yesterday my husband drove off with his wallet and ID card on the roof of the car (both were later found in the track a kilometre from the house) and I had my Visa card confiscated by a very uppity machine (don’t let’s go there). Back to the disappearing carrots: Texas, the equine retiree with a highly inflated sense of entitlement, broke into the storage grange and scoffed the whole ‘hit’! To my further shame, he also chewed Yvette’s straw basket to bits. Anyway, he was about to move on to the beetroot when I discovered him. Luckily the beets were recovered, almost slobber-free, and I was able to whip up this cake.

This is another adaptation from Amber Rose’s wonderful book ‘Love, Bake, Nourish’.

Preheat the oven to 180°C and grease and prepare a 22cm cake tin. Mix the beetroot, eggs, honey, vanilla extract, cocoa powder, baking powder and salt, beating well. Once the ingredients are well combined, fold in the ground almonds. Melt the chocolate in the rum over a low heat and add the oil. Stir the chocolate and oil into the existing mixture, combining well. Transfer to the cake tin and bake for 35 minutes, or until a fork inserted into the centre comes out clean. Leave to cool before serving, lightly dusted with cocoa powder.