Olive, red pepper and anchovy cake and a volatile hoarder 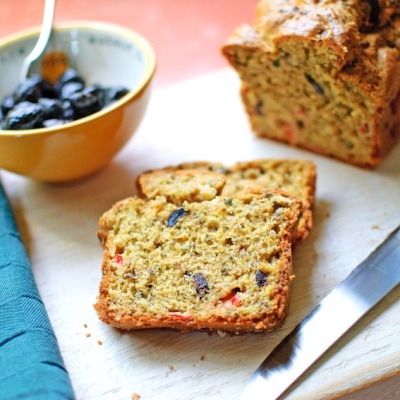 To follow on from this post, unfortunately our black hen died. Hens seem to be so vulnerable to attack from disease, foxes, dogs and perhaps even other hens. I imagined she was suffering from depression when maybe she was just sad to be sick. 😦

We were (when I say ‘we’ I suppose I mean ‘I’ as, unlike me, neither husband nor son obsesses about our animals) rather worried about the white hen who had disappeared suddenly. We eventually found her over a week later under two enormous bales of hay in a little-used barn, sitting on no fewer than 23 eggs; The little minx had obviously been hiding, laying and hoarding! Don’t ever let it be said that hens can’t multitask. So to add to our  animals’ extensive list of mental disorders, we now appear to be the proud owners of a compulsively hoarding hen.  Can anyone tell me where I can get my hands on an animal that doesn’t have ‘issues’?

This savoury cake is based on an old French recipe and goes beautifully with soup or hors d’oeuvres. It’s quite light and crumbly and, being made with spelt flour, healthy, wheat-free and low GI.

Preheat the oven to 180°C. Combine the flour, baking powder,  bicarbonate of soda and paprika and add the eggs and yoghurt, mixing well. Continue mixing and add the olive oil until you obtain a homogenous paste. Stir in the other ingredients and once well combined, spoon the mixture into a medium-sized, oiled loaf tin. Cook for about 40 minutes, or until a fork comes out clean.

22 responses to “Olive, red pepper and anchovy cake and a volatile hoarder”